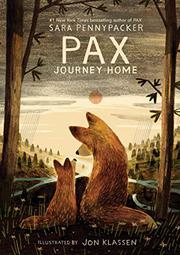 A year after Peter finds refuge with former soldier Vola, he prepares to leave to return to his childhood home. He plans to join the Junior Water Warriors, young people repurposing the machines and structures of war to reclaim reservoirs and rivers poisoned in the conflict, and then to set out on his own to live apart from others. At 13, Peter is competent and self-contained. Vola marvels at the construction of the floor of the cabin he’s built on her land, but the losses he’s sustained have left a mark. He imposes a penance on himself, reimagining the story of rescuing the orphaned kit Pax as one in which he follows his father’s counsel to kill the animal before he could form a connection. He thinks of his heart as having a stone inside it. Pax, meanwhile, has fathered three kits who claim his attention and devotion. Alternating chapters from the fox’s point of view demonstrate Pax’s care for his family—his mate, Bristle; her brother; and the three kits. Pax becomes especially attached to his daughter, who accompanies him on a journey that intersects with Peter’s and allows Peter to not only redeem his past, but imagine a future. This is a deftly nuanced look at the fragility and strength of the human heart. All the human characters read as White. Illustrations not seen.