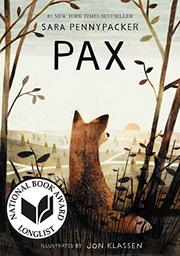 A motherless boy is forced to abandon his domesticated fox when his father decides to join soldiers in an approaching war.

Twelve-year-old Peter found his loyal companion, Pax, as an orphaned kit while still grieving his own mother’s death. Peter’s difficult and often harsh father said he could keep the fox “for now” but five years later insists the boy leave Pax by the road when he takes Peter to his grandfather’s house, hundreds of miles away. Peter’s journey back to Pax and Pax’s steadfastness in waiting for Peter’s return result in a tale of survival, intrinsic connection, and redemption. The battles between warring humans in the unnamed conflict remain remote, but the oncoming wave of deaths is seen through Pax’s eyes as woodland creatures are blown up by mines. While Pax learns to negotiate the complications of surviving in the wild and relating to other foxes, Peter breaks his foot and must learn to trust a seemingly eccentric woman named Vola who battles her own ghosts of war. Alternating chapters from the perspectives of boy and fox are perfectly paced and complementary. Only Peter, Pax, Vola, and three of Pax’s fox companions are named, conferring a spare, fablelike quality. Every moment in the graceful, fluid narrative is believable. Klassen’s cover art has a sense of contained, powerful stillness. (Interior illustrations not seen.)