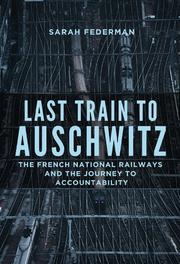 The French National Railways and the Journey to Accountability

A historical account of how the French national railway company collaborated with the Nazis and of its contentious journey toward atonement.

During the German occupation of France during World War II, the Société Nationale des Chemins de Fer Français, a state-owned railway firm, helped transport around 76,000 Jewish deportees to death camps. In the wake of France’s liberation, however, the beleaguered citizenry seemed to have little appetite for prosecuting its people’s war-related crimes; as author Federman, an assistant professor of negotiation and conflict management at the University of Baltimore, memorably puts it: “France emerged from World War II like most of Europe—too cold, hungry, and perhaps too disoriented to do much justice seeking.” During the occupation, she points out, the SNCF played a series of contradictory roles, variously assuming the mantle of a victim when the French government signed it over to the Germans; a hero of the Resistance, when some of its workers fought back; and a perpetrator of treason when it aided Nazi crimes. Later, when its collaboration became a topic of angry debate, the company retreated into legal technicalities and strenuously avoided acknowledging its moral transgressions or making any restitution. Partly because of protests in the United States, a 2014 settlement of $60 million was finally reached, including a considerable donation to Holocaust education and commemoration. The author furnishes a remarkably thorough account of the issues—historical, legal, and moral—as well as a rigorously lucid exposition of the “discursive landscape” surrounding them. Also, Federman astutely examines the debate as an illustrative microcosm of corporate responsibility at large, calling it “a rare example of what accountability looks like when a company…participates in a variety of transitional justice practices: commemoration, education, apology, and transparency.” The author’s analysis admirably combines scholarly scrupulousness with moral insight as she documents the personal stories of some who survived the Holocaust and others who did not.

A rare book that ably combines historical edification with a moving narrative.