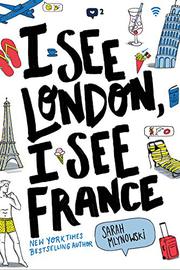 I SEE LONDON, I SEE FRANCE

When two college-age best friends take a backpacking trip across Europe, their relationship with each other—and men both familiar and new—is put to the test.

Mlynowski is known for infusing her tales of teen friendship and romance with comedy and banter, and this latest is no exception. When Matt cheats on Leela right before they’re supposed to go to Europe for the summer, Leela, who’s Indian, begs her BFF, Sydney, who’s white and Jewish, to take his place. Sydney reluctantly agrees—she’s terrified to leave her agoraphobic mother behind with her younger sister—and soon, the two are off on the adventure of a lifetime. But when they run into Matt, who is white, and his hot, olive-skinned friend Jackson at baggage “reclaim,” as the British delightfully call it, it’s clear this trip is going to be far different than expected—and not just for Leela. While the novel has a lively, light nature—thick doses of witty repartee, a rotating cast of international heartthrobs, and fun “travel tips” relayed before each new destination—it incorporates serious themes in a natural, delicate way, including assuming responsibility for a sick parent, the difficulties of traveling with friends, and the realities of a long-distance relationships. The ending, shockingly abrupt, feels out of place given the good-natured fizz that’s gone before.