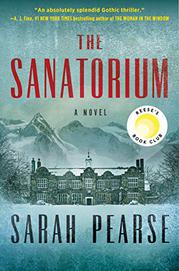 A hotel built on the grounds of a sanatorium has more dead bodies than paying guests.

A police detective on sabbatical after flubbing a case, Elin Warner travels with her boyfriend, Will, to Le Sommet, a remote, glass-walled, five-star hotel in the Swiss Alps, at the invitation of her estranged brother, Isaac. Isaac is throwing a party to celebrate his engagement to Laure, assistant manager at the hotel, which has been the focus of local controversy due to its shadowy history. Elin's creepy feelings about the trip are quickly confirmed as a storm cuts off access to the mountain, a receptionist is kidnapped, a dead body is found in the snow, and Laure disappears. As overloaded, grisly, and ultimately silly as Pearse's locked-room debut may be, the biggest mystery is how Elin ever made it out of the police academy. As she slowly reasons her way through the unfolding situation, her deductions of even the most obvious points appear in italics—"That means Laure has another phone." "This…it isn't an accident. She's been killed. This is murder"—as do what seem to be the protagonist’s questions to herself about how to move things along. "So where could they have gone?" "So what are my next steps going to be?" "She examines the glass balustrade in front of her. Can I get over it?" What Elin can't get over is a tragedy in her childhood for which she holds her brother responsible; it comes up every few pages until being resolved with a not-too-believable twist that may or may not be retwisted in a mystifying epilogue. Fortunately for Elin, she does have a few insider tricks up her sleeve. "She knows that there is an app called Find My iPhone...it would show the last location where it had a signal." Wait. Why are you laughing? This is a thriller!