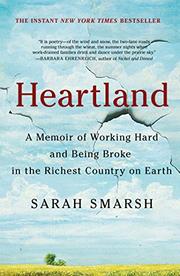 A Daughter of the Working Class Reconciles an American Divide

In her first book, addressed to her imaginary daughter—the author, born in 1980, is childless by choice—the author emphasizes how those with solid financial situations often lack understanding about families such as hers. Smarsh, a fellow at Harvard’s Kennedy School of Government, lived a nomadic life until becoming a first-generation college student. Smarsh vowed to herself and her imaginary daughter to escape the traps that enslaved her mother, grandmothers, female cousins, and others in her family. “So much of childhood amounts to being awake in a grown-up’s nightmare,” she writes. “Ours happened to be about poverty, which comes with not just psychological dangers but mortal ones, too.” Because the author does not proceed chronologically, the numerous strands of family history can be difficult to follow. However, Smarsh would almost surely contend that the specific family strands are less important for readers to grasp than the powerful message of class bias illustrated by those strands. As the author notes, given her ambition, autodidactic nature, and extraordinary beauty, her biological mother could have made more of herself in a different socio-economic situation. But the reality of becoming a teenage mother created hurdles that Smarsh’s mother could never overcome; her lack of money, despite steady employment, complicated every potential move upward. The author’s father, a skilled carpenter and overall handyman, was not a good provider or a dependable husband, but her love for him is fierce, as is her love for grandparents beset by multiple challenges. While she admits that some of those challenges were self-created, others were caused by significant systemic problems perpetuated by government at all levels. Later, when Smarsh finally reached college, she faced a new struggle: overcoming stereotypes about so-called “white trash.” Then, she writes, “I began to understand the depth of the rift that is economic inequality.”

A potent social and economic message embedded within an affecting memoir.