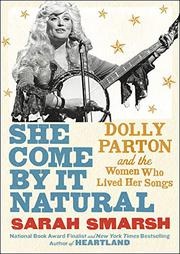 SHE COME BY IT NATURAL

Dolly Parton and the Women Who Lived Her Songs

Before her recent elevation to the status of universally beloved icon,” writes Smarsh, Parton “was best known by many people as the punch line of a boob joke.” This book, based on essays the author wrote for No Depression magazine in 2017, explores Parton's musical and cultural contributions. It also tells stories about the women so often at the heart of Parton's songs. Bent on becoming a star, she left for Nashville after high school. But she faced many challenges as an attractive woman working her way to the top. Parton's breakthrough song, “Dumb Blonde,” released in 1967, foretold the attitude a largely sexist country music industry took toward the singer, especially in the early part of her career. Her first industry mentor, Porter Wagoner, for example, recognized Parton's musical talent, but he tried to use it to serve his own “thunderous ego.” The quick-witted grit that helped her endure would later come out in the characters she played in hit Hollywood films like 9 to 5 (1980). Smarsh argues that this "humorous bravado" arises not just from Parton herself, but from the "culture of working-class women" she represents. The singer’s savvy is also as much sexual as entrepreneurial. The author shows how Parton used both to reach success—and not just in music: She has said that Dollywood is “the most lucrative investment she ever made.” Her influence is now so pervasive that she has become a cross-genre inspiration to young artists like hip-hop star Nicki Minaj. Though not a self-identified feminist, Parton exemplifies the "unsurpassed wisdom about how gender works in the world" that Smarsh believes is part of the working-class female experience.

A highly readable treat for music and feminist scholars as well as Parton's legion of fans.