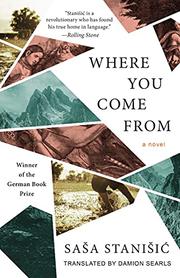 WHERE YOU COME FROM

A man displaced by war considers what it means when your home country ceases to exist.

Where do you come from? It seems like an easy enough question, but for the narrator of Stanišić’s novel, it’s anything but. When he’s asked the question, he equivocates: “First it depends on what your where is aiming at….However you look at it, your place of origin is just a construct! A kind of costume you have to wear forever once it’s been put on you. And so a curse!” The narrator—who shares his name and nationality with the author—has good reason for his vagueness. He lives in Germany, but his home country is harder to pin down: "The country where I was born no longer exists. For as long as the country still existed, I thought of myself as Yugoslavian. Like my parents, who were from Serbian (Father) and Bosnian-Muslim (Mother) families.” The novel alternates between stories of the narrator’s upbringing in Heidelberg, where his family fled after the breakout of the Yugoslav Wars, and memories of his grandmother, who’s slowly losing her memory to dementia. Stanišić has a deft hand at both the tragic and the comic: The narrator’s family “shattered along with Yugoslavia and have not yet been able to put ourselves back together again,” he writes in one passage, but later proclaims himself “the Puberty World Champion in Avoiding-Talking-to-Parents,” whose mother “probably wanted to strangle [him] with a scallion” after he became a vegetarian to impress a girl he liked. The novel ends with a Choose Your Own Adventure–style narrative that’s rendered perfectly and heartbreakingly; it’s affecting but not manipulative. Stanišić's book, ably translated by Searls, is full of tenderness and compassion and also a real intelligence—it’s a stunning novel that asks what it really means to be from somewhere, anywhere. “Words lurk over my head, they unnerve me, delight me, I need to find the right ones among them for this story,” Stanišić writes. He found them for sure.