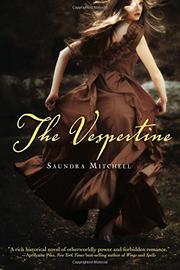 Sixteen-year-old Amelia travels from Maine to Baltimore to find a husband in 1889, never expecting to end up by destroying her own friends in this historical supernatural romance. Amelia learns quite by accident that at sunset, or Vespers, she sees visions of the future. At first it’s a game, with predictions of pretty new dresses and desirable dancing partners. Eventually, though, Amelia’s visions become darker. She delights her friends when she tells of good fortune, but when tragedy strikes, they blame her. Meanwhile Amelia has met Nathaniel, a poor but talented artist whom she knows can never be a suitable husband yet to whom she’s immensely attracted. No wonder. It turns out that Nathaniel has a supernatural talent of his own. Mitchell depicts Victorian middle-class society with real flair. Her descriptions of the girls ring vibrantly true. Readers see how they act and talk, how they worry about their dresses and their future husbands. The author takes a chance by using some antiquated language, but readers interested in the story should be able to follow the action with no difficulty. Both the forbidden romance and the Vespers visions work to keep readers’ interest high. A nifty surprise ending ices the cake. (Paranormal romance. 12 & up)