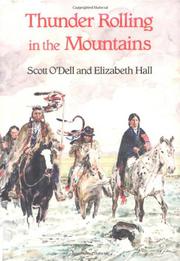 THUNDER ROLLING IN THE MOUNTAINS

Seen through the eyes of Chief Joseph's daughter, Sound of Running Feet, O'Dell's last novel (coauthored and completed after his death by his wife) recounts the circuitous, tragic journey of the Ne-mee-poo (Nez Perce) from their Oregon home to the Lapwai Reservation in Idaho. Wisely recognizing that there's no way to fight the entrenching whites, Chief Joseph counters calls to war from dissenting tribal leaders and agrees to lead his people on what becomes an epic ordeal. Attacked by settlers en route, they win some battles against the "Blue Coats,"but the decimated tribe makes it into Crow territory only to find that their former allies are in league with the Army. Heading for refuge with Sitting Bull in Canada, they're caught in a surprise attack that leaves no choice but surrender. Bringing this bleak historical episode to life in spare, supple prose that echoes Joseph's own dignified words, the authors offer a fascinating look at the heroism of ordinary people. While the strong-willed narrator, her father, and her brave betrothed at first seem larger than life, it is quickly apparent that they don't consider themselves as such; and though she wishes she could fight, the girl dutifully takes her place caring for the young and the infirm. The authors don't tone down war's violence; they simply present it with unembellished clarity that is certain to leave a lasting impression, ending on a memorable note of reconciliation. A fitting end to a distinguished career. (Fiction. 10-14)