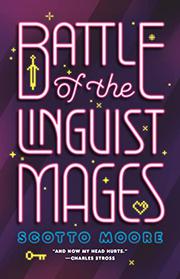 BATTLE OF THE LINGUIST MAGES

A champion virtual reality gamer gets tangled up in a real-life war between alien-powered magicians.

Isobel is the Queen of Sparkle Dungeon. The video game's best diva-caster—a player who uses her actual voice to sling spells—she wields the series' four most powerful artifacts. But when the Queen combines the artifacts' powers, she unwittingly rips a hole in the fabric of the game's spacetime. Still, nothing seems amiss when SparkleCo's ad agency reaches out to ask Isobel to test a new game. She is the Queen, after all, and no one can overtake her in the leaderboards. Working under the cover of a comprehensive nondisclosure agreement, Isobel learns that the ad agency is working on real-life magic: multilayered syllables that manipulate whomever hears them into feeling, thinking, or doing whatever the speaker wishes, thanks to the power of alien punctuation marks. Sparkle Dungeon's best diva-caster turns out to be a natural with these "power morphemes," but she begins to suspect that she isn't working for the good guys after meeting a few of the firm's other clients—including a Scientology-esque church and an "insidious" politician. Then there's her predecessor, Maddy, who left the ad agency after crafting her own set of morphemes and now wants to kidnap Isobel to work as part of her resistance movement. Maddy's explosive entrance cuts the novel's brake lines, pitching readers into a madcap adventure of magic and mayhem. Moore has produced a frenetic romp that makes up for its lack of depth with a whole lot of fun. Although Isobel never entirely comes together as a three-dimensional character, her funk-infused narration does a good job of fleshing out her supporting cast.

Glitter-bombed popcorn fiction at its finest.