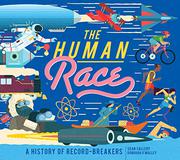 Factoids about various “races” across time.

Across 46 double-page spreads, readers learn about international “races” that cover a range of topics, from actual contests such as the Olympic Games and the Tour de France to general firsts, such as to the top of Mount Everest and to discover radiation. Along the way, facts and information are dolloped out in small paragraphs that stimulate and tease readers’ interest. Sadly, the teasing happens too frequently, and information is provided with little context or supplemental information. For example, readers learn that two forerunners to the bicycle were the draisine and the penny farthing. But the draisine looks like a modern bicycle without pedals while the penny farthing is a vastly different (and scarier-looking) conveyance. What prompted the design of the penny farthing? The Eurocentric focus of the book is a significantly larger flaw, as White faces and White achievements dominate the facts and illustrations. Sherpa mountaineer Tenzing Norgay is appropriately given equal visual and textual focus to Edmund Hillary, a White New Zealander, but Japanese climber Junko Tabei, the first woman to summit Everest, is depicted fully covered behind snow goggles and oxygen mask in a far corner of the page. Likewise, the information about Africa focuses textually and visually on David Livingstone, and the only Indigenous Africans depicted are early Homo sapiens dressed in stereotypical animal furs. Figures highlighted in the science section include Charles Darwin, Marie Curie, Isaac Newton—it’s the same old, same old. (This book was reviewed digitally with 10.8-by-19.2-inch double-page spreads viewed at 81% of actual size.)

Readers hoping for alternatives to the dominant narratives will not find them here.