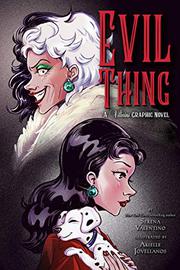 From the Villains series

A chronicle of Cruella De Vil’s descent into Dalmatian destruction.

The only child of Lord and Lady De Vil, Cruella was enamored by high society life from a young age. She idolized her cold, demanding mother and loved her caring father, despite his giving her less extravagant gifts. Both parents wanted her to distinguish herself, though they intended very different meanings by that word. While young Cruella believed that servants and others from less privileged backgrounds should know their places, Anita, her less socially lofty best friend, was an exception. But as she grew up and married, she had to face the question of what it really meant to possess wealth, beauty, and happiness. Framed as a memoir, this story vividly expresses Cruella’s personality. Valentino does a solid job of establishing the cast of characters, and fans of the animated film will enjoy connecting the threads. While there are moments of softness that evoke readers’ empathy, Cruella unapologetically wields her power to behave cruelly. She is ultimately fueled by her desperation for maternal validation, jealousy, delirium, and a perhaps-cursed pair of earrings. Jovellanos’ art deftly captures a range of emotions, specifically in showing how Cruella’s face is transformed in response to her whims. Using a color palette of muted reds, blacks, grays, and whites, the illustrations express a fitting tone for a Cruella tell-all. Characters read as White.

Entertaining for fans of villain backstories and Disney classics alike.