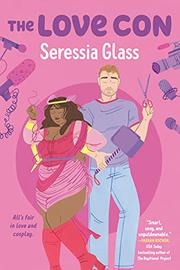 In order to secure her cosplay crown, an aspiring costumer must partner up with her best friend—while convincing everyone else that they're a couple.

Kenya Davenport knows she's always been something of a disappointment to her parents, who wanted her to follow in their footsteps and pursue a STEM field instead of her lifelong dream—to turn her passion for cosplay into a profession. Thanks to the reality competition show Cosplay or No Way, she finally has the chance to show the rest of the world what she's capable of, and now she's officially made it to the final round. The only problem is that the last round is a pairs challenge, and Kenya panics when she's put on the spot and asked to announce her partner live on national television. Choosing Cameron Lassiter, her best friend and roommate, isn't necessarily a bad thing, but blurting out the lie that he's her boyfriend presents a whole new complication. Luckily, Cam is willing to play along, in part because he's had a crush on her since they were kids. Pretending they're actually a couple for the sake of the producers following them around shouldn't be too difficult, right? As their romantic role-play continues, however, they have the mutual revelation that there are very real feelings beneath the surface. The only question is: Will they keep up the charade just for the sake of the cameras, or will they try for something real after the winner is crowned? Glass has written an engaging romance that will win over romance readers and die-hard fandom nerds alike, with a couple to root for in Kenya and Cameron even as external circumstances threaten to shake their faith in one another. Most importantly, Kenya is a heroine who staunchly refuses to exist on the sidelines, fighting to prove that she deserves every aspiration she dreams of reaching.

A charming rom-com perfectly crafted from all the best tropes.