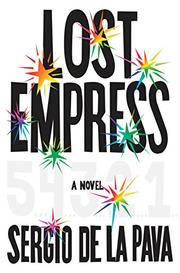 If Thomas Pynchon and Elmore Leonard had conspired to write North Dallas Forty, this might be the result: a madcap, football-obsessed tale of crossed destinies and criminal plots gone awry.

You know you’re in fictional territory when the Dallas Cowboys are portrayed as a winning team; the world is veritably upside down when things like that happen. That’s one of many conceits de la Pava (Personae, 2011, etc.), New York City public defender by day and shaper of the modern canon by night, plays with in this loopy yarn, which embraces surrealist art, the law, theoretical physics, politics, and just about everything else under the sun. But especially football: At the heart of de la Pava’s shaggy dog tale, overlong but not overworked, is an unabashed love for pigskin. Young Nina Gill hauls up the underdog Paterson Pork team from deepest obscurity in a scenario out of a gridiron version of King Lear after having been shoved aside from inheriting said Cowboys after her father dies; in grim revenge, Nina decides to take the indoor-playing Pork to the NFL championship, an impossibility, of course. She’s an encyclopedia of the game: “Before ’seventy-eight defensive backs could hit receivers with impunity all the way down the field provided the ball hadn’t been thrown,” she tells sidekick Dia Nouveau, who’s scrambling to keep up with “the various permutations of football knowledge that woman is essentially compelling her to acquire.” Dia has bigger fish to fry, though, and so does Nuno DeAngeles, street philosopher and would-be crime lord, who’s gotten himself tucked away on Rikers Island and finds that his “only ally now is René Descartes,” inasmuch as Cartesian dualism allows his mind to flow freely out into the boroughs to work mischief until his body can catch up. Parts of the story are seemingly the standard aspirational sports rah-rah, but turned on their head, and the caper that plays out alongside Nina’s championship run, laced with philosophy and cornerbacks, is a blast to watch unfold.

A whirling vortex of a novel, confusing, misdirecting, and surprising—and a lot of fun.