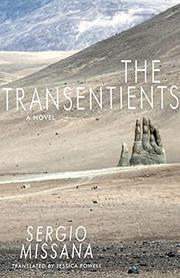 A man’s midlife crisis includes strange periods when he inhabits the lives of other people.

This is the first English translation of a novel by Chilean writer Missana, who has written seven books in Spanish. The narrator is Tomás Ugarte, the creative director of a Santiago advertising agency, who seeks to restart his life as a tabula rasa ahead of his 40th birthday. He quits his job, proceeds with the final stages of divorcing his wife, and moves into a new apartment. But the normal details occupying his days fade in significance when he has a spell during which he crosses over into another life, experienced through the eyes and other senses of an old homeless woman in a specific Santiago neighborhood. There’s no doubt in Tomás’ mind that “the transformation had truly occurred.” When he returns to being just himself, he searches for the woman and tries to steer her away from something he believes lies in her future. Tomás undergoes more of these “transentient” experiences, including a harrowing climb on a storm-lashed mountain and a screenwriter’s visit to the set of his movie. Each transposition becomes a detailed narrative, and together they offer links or clues in the book’s episodic puzzle of a plot. The climber is a nephew of the homeless woman; Tomás’ ex-wife is also working on the movie. The alter egos provide Tomás with an eerie version of the human attachments he sought to avoid and give the author a protagonist with a highly fluid nature. Missana, abetted by a fine translation from Powell, raises questions about identity, friendship, intimacy, and empathy while building a psychological mystery on the shifting border between realism and fantasy, “a thin membrane that threatened to tear apart at any moment.”