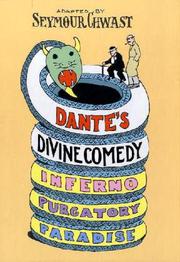 In his first graphic novel, one classic artist channels another.

With all due respect to Dante, this is Chwast’s Divine Comedy, one that uses the poet’s masterwork as a launching pad for a flight to the creative heavens. An influential, revolutionary illustrator, Chwast (Seymour: The Obsessive Images of Seymour Chwast, 2009, etc.) meets his match in one of the cornerstones of Western literature. Distilling Dante’s three volumes into little more than 100 pages of large panels (many of them page-sized), he adheres to the tri-partite structure of the original without overburdening the spirit with reverence. Chwast’s Dante has a jaunty fedora and a pipe clenched between his teeth; his Virgil is a bespectacled Brit with a bowler; his Beatrice has the beauty of a classic Hollywood glamour girl. Thus, just as Dante wrote in the Italian vernacular of his day at a time when Latin was the language of philosophy and religion, Chwast has recast the work in today’s vernacular of graphic narrative, sacrificing the literary poetry of the original for visual imagery that is thoroughly accessible. From the boiling river of blood and the rain of excrement in the circles of hell through the ascent into heaven’s ineffable beauty (as with Dante, the transitional stage of purgatory is less compelling than the extremes), the artist makes the Divine Comedy irresistibly comic and inspirationally transcendent.

An achievement kindred to R. Crumb’s Genesis (2009), though less literal and more compressed.