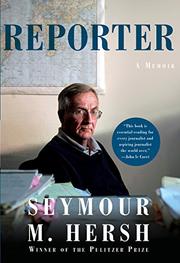 One of the most skilled investigative journalists in American history shares his saga in compelling detail.

Hersh (The Killing of Osama bin Laden, 2016, etc.), who has won seemingly every major literary award and is often portrayed as gruffly relentless, shows his charming side as he recounts his Chicago childhood with a small-businessman father, a quietly supportive mother, and three siblings—a twin brother and twin sisters. A quick learner with a restless curiosity, Hersh began and abandoned several career paths while attending college. He slipped into a low-paying, unglamorous journalism job in Chicago, departed and returned to that career path several times, and then needed to figure out what to do after completing “six months as a grunt in the U.S. Army,” which “was not a transformative experience.” The city boy became a rural journalist in South Dakota, where his reporting initiative led to a book about controversial chemical and biological weapons, freelance investigative exposés about massacres of Vietnamese civilians by American troops (reporting that led to his Pulitzer Prize in 1970), and, in 1972, a position at the New York Times as a reporter with the Washington bureau. Hersh takes readers behind the scenes as he exposes corrupt U.S. foreign policy, Defense Department bumbling in numerous wars, political coverups during Watergate, private sector corporate scandals, and torture tactics used by the U.S. government against alleged terrorists after 9/11. The author shares insightful (and sometimes searing) anecdotes about fellow journalists, presidents and their cronies, military generals, and numerous celebrities. Readers interested in a primer about investigative techniques will find Hersh a generous teacher. He explains why he tends to be a loner, zigging when other journalists are zagging. Hersh discloses little about his wife and children, but otherwise, candor is the driving force in this outstanding book.

Rarely has a journalist’s memoir come together so well, with admirable measures of self-deprecation, transparent pride, readable prose style, and honesty.