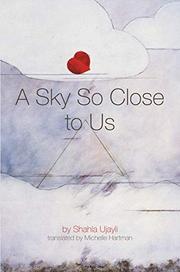 A SKY SO CLOSE TO US

A Syrian woman reckons with personal illness in parallel with the destruction of her homeland.

Syria’s ongoing civil war provides the backdrop for Ujayli’s third novel (Persian Carpet, 2013, etc.) but doesn’t claim center stage; indeed, one theme of this globe-trotting, fatalistic tale is that catastrophes large and small lurk even if we escape a war zone. The narrator, Joumane Badran, is a Syrian native and humanitarian worker in her 30s living in Amman, Jordan, while her father and two sisters have remained in Syria, relating grim news of bombings and power plays by the “squalid archipelago of factions” there. Joumane herself witnesses the impact secondhand, monitoring a refugee camp in Jordan, but the bulk of the novel focuses on two more interior concerns: her budding relationship with Nasser al-Amireh, a climate expert, and a cancer diagnosis that leaves her fearing death, wracked from chemotherapy and radiation treatment. Or, in other words, she’s focused on love and mortality, and her narrative sinuously moves from moments of grace to calamity and tragedy, past and present. Tales of coincidence and harsh irony abound, as when Joumane recalls that she'd met her oncologist decades earlier on family trips to Italy and that he’d gotten his degree in time to monitor his stepfather’s death. That’s just one case in which Ujayli ties up plotlines with a jet-black bow, but for all its concern with mortality and entropy, there’s plenty of narrative and intellectual energy in the story, as when Joumane recalls her father’s travels (he witnessed the 1963 March on Washington) or her friends' and sisters’ love affairs, which are tinged with mythos (Pygmalion, pirates). “The final truth is that your body is your homeland and the greatest treason is for it to betray itself,” she writes, and the novel thoughtfully maps where self, family, and country intersect.

A purposefully digressive and storm-clouded narrative, appropriate for capturing a Syrian expatriate’s mood.