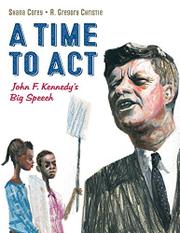 A TIME TO ACT

Corey starts this story of Kennedy’s speech, and the context under which it was delivered, early—too early—in Kennedy’s life. Readers learn that his brother was his father’s favorite and that he was sickly. They also learn that he came from wealth, but Corey doesn’t take this opportunity to discuss class in America and how it impinges on racism. Instead, readers learn he was a courageous soldier in World War II and wrote Profiles in Courage. The writing is choppy, perhaps in an effort to be punchy: “In 1946, Jack ran for Congress. His whole family helped. His father gave money and advice. His mother and sisters gave teas.” By midbook, Corey begins to focus in on Kennedy’s political conundrum. When it comes to Kennedy’s dallying on the civil rights issue, Corey does hit a number of nails squarely on the head: Kennedy was being upstaged by children on their crusade, he was losing the African-American vote, he played politics with Congress. Still, the speech was historic, as the book implies, and the author’s note elaborates upon this. Christie’s illustrations show a good, moody application of radiant paint and a sharp caricaturist’s touch.

A halting misuse of page space that, in the end, finally presents Kennedy’s speech in the proper light.