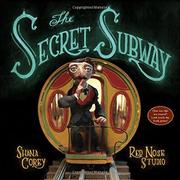 In mid-19th-century New York, horses and horse-drawn vehicles were the only means of transportation, and the din created by wheels as they rumbled on the cobblestones was deafening. The congestion at intersections threatened the lives of drivers and pedestrians alike. Many solutions were bandied about, but nothing was ever done. Enter Alfred Ely Beach, an admirer of “newfangled notions.” Working in secret, he created an underground train powered by an enormous fan in a pneumatic tube. He built a tunnel lined with brick and concrete and a sumptuously decorated waiting room for passenger comfort. It brought a curious public rushing to use it and became a great though short-lived success, ending when the corrupt politician Boss Tweed used his influence to kill the whole project. Here is science, history, suspense, secrecy, and skulduggery in action. Corey’s narrative is brisk, chatty, and highly descriptive, vividly presenting all the salient facts and making the events accessible and fascinating to modern readers. The incredibly inventive multimedia illustrations match the text perfectly and add detail, dimension, and pizazz. Located on the inside of the book jacket is a step-by-step guide to the creative process behind these remarkable illustrations.

Absolutely wonderful in every way.