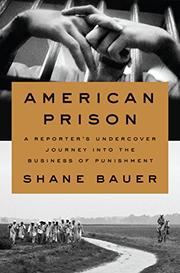 A Reporter's Undercover Journey into the Business of Punishment

A penetrating exposé on the cruelty and mind-bending corruption of privately run prisons across the United States, with a focus on the Winn facility in Louisiana.

That prison was operated by the Corrections Corporation of America, but after a shorter version of this book appeared in Mother Jones, the company rebranded as CoreCivic and lost the Winn contract with the government. Bauer (co-author: A Sliver of Light: Three Americans Imprisoned in Iran, 2014), who has won the National Magazine Award in addition to many others, spent four months inside the prison as a corrections officer, carrying out an undercover journalism assignment to find the truth behind CCA’s documented record of lies about its practices. At least 8 percent of inmates in state prisons must adjust to the practices of laxly regulated private companies rather than those in government-run facilities. At Winn, correctional officers (a term they prefer to “guard”) risk their safety every day for $9 per hour. Bauer determined that the guards, most of them unarmed, were outnumbered by the inmates by a ratio as high as 200 to 1. The author had also viewed prison from a different perspective, having been incarcerated for two years in Tehran’s notorious Evin Prison because he had unwittingly crossed a border while hiking as a tourist. Despite the awful conditions in his Iranian cell, Bauer found many of the conditions in Louisiana to be even worse. Nearly every page of this tale contains examples of shocking inhumanity. During his four months at Winn, Bauer also noticed a cruelty streak developing in his own character; even some of the inmates told Bauer that he was changing, and not for the better. Interspersed with the chapters about Winn, Bauer includes historical context—e.g., after the end of the Civil War, states continued slavery by a different name, forcing prisoners to pick cotton and perform other grueling tasks that produced income for prison administrations.

A potent, necessary broadside against incarceration in the U.S., which “imprisons a higher portion of its population than any country in the world.”