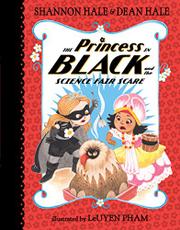 THE PRINCESS IN BLACK AND THE SCIENCE FAIR SCARE

From the Princess in Black series, volume 6

Princess Magnolia’s attempt at a monster-free science fair goes as well as can be expected in the sixth book of the Princess in Black series.

With the Goat Avenger on monster watch, Princess Magnolia heads to the Interkingdom Science Fair. While initially excited about her project—a poster showing “how seeds grow into plants”—and seeing her fellow princess friends, Magnolia’s soon intimidated by how ambitious and fancy the other royals’ projects are. Why, Tommy Wigtower even has a talking volcano—when his baking-soda–and-vinegar volcano didn’t erupt properly, he added monster hair. The resulting goo monster wreaks havoc on the fair, leading to appearances by the Princess in Black and the Princess in Blankets to battle the beast. Evicted from the volcano, the monster tries to find a new home, prompting Princess Honeysuckle, Princess Orchid, and Princess Snapdragon (all sans aliases and costumes) to help deliver the monster to the monster hole for a new home. While it’s great to see the heroics from princesses in full regalia, the final page hints that they’ll soon join in the alter-ego fun. Perhaps the best gem is when the science-fair winner is announced and the graceful losers offer genuine congratulations while resolving to try harder next year. Aside from white Magnolia, the cast is multicultural and multiracial.