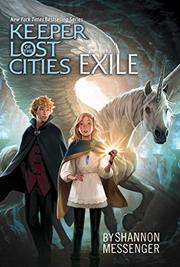 From the Keeper of the Lost Cities series, volume 2

Full-blown middle-volume-itis leaves this continuation of the tale of a teenage elf who has been genetically modified for so-far undisclosed purposes dead in the water.

As the page count burgeons, significant plot developments slow to a trickle. Thirteen-year-old Sophie manifests yet more magical powers while going head-to-head with hostile members of the Lost Cities Council and her own adoptive elvin father, Grady, over whether the clandestine Black Swan cabal, her apparent creators and (in the previous episode) kidnappers, are allies or enemies. Messenger tries to lighten the tone by dressing Sophie and her classmates at the Hogwarts-ian Foxfire Academy as mastodons for a silly opening ceremony and by having her care for an alicorn—a winged unicorn so magnificent that even its poop sparkles. It’s not enough; two sad memorial services, a trip to a dreary underground prison, a rash of adult characters succumbing to mental breakdowns and a frequently weepy protagonist who is increasingly shunned as “the girl who was taken” give the tale a soggy texture. Also, despite several cryptic clues and a late attack by hooded figures, neither the identity nor the agenda of the Black Swan comes closer to being revealed.

However tried and true, the Harry Potter–esque elements and set pieces don’t keep this cumbersome coming-of-age tale afloat, much less under way.