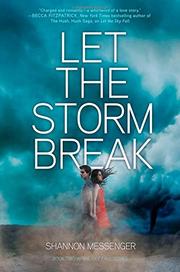 From the Sky Fall series

With Audra off dealing with fallout from revelations in Let the Sky Fall (2013), Vane is stuck by himself figuring out how to be a sylph king on the verge of war.

The sylph army known as the Gales desperately wants to use Vane and his Westerly winds as a weapon against power-hungry, one-note Raiden, but Vane knows the Westerly nature is too peaceful. Luckily, the Gales don’t know that Audra also speaks Westerly, a result of the forbidden romance and magical bond between the two—another secret. They still hope Vane will fall for the last of the previous royal family and would be furious to know that the reason Vane broke off that arranged engagement was Audra. Meanwhile, Audra learns the dark secret to Raiden’s strength. Conveying so much information causes the first act to progress slowly, resulting in weak tension until the vague stakes become specific and immediate. Tasked with many expository reveals, Audra’s narration doesn’t shine as brightly as Vane’s chapters. Vane is a bundle of charming contradictions—protective yet pacifistic, nobly loyal yet unable to hear “haboob” (a type of dust storm) without boob jokes. Once characters deal with the ends-justify-the-means idea of sinking to Raiden’s level to fight him and reach the fight scenes, the story becomes a page-turner right to a cliffhanger.

Witty, romantic and filled with personality—after the slow start.