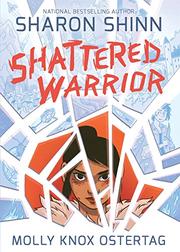 When Colleen tries to warn her niece Lucy about the dangers of strange men, Lucy shrugs it off. “Everything is dangerous,” she says. That might be the theme of this graphic novel. The most dangerous men in it turn out to be Colleen’s suitors. After the pointy-eared Derichet invaders conquered her world about a decade ago, more than one of them has tried to woo Colleen. She’s more interested in Jann, a Chromatti warrior who’s part of the resistance. But: “Don’t let [Lucy] go near the Chromatti,” Jann says. “It’s dangerous.” Colleen is a Cavenaugh, one of the Great Families of Comstock City, while the Chromatti are from the mining underclass; although the former class orders have been upended by the Derichet occupation, tensions still exist. One of the joys of the novel is seeing people from different parts of society, with no reason to trust each other, join together to fight a revolution. Socialites and factory workers and warriors all unite against the Derichet. The plot may be familiar, but the social customs of each group are defined so precisely that every detail feels strange and surprising. It’s also refreshing to see so many different races and so many shades of brown on each page. In her print debut, Ostertag (creator of the webcomic Strong Female Protagonist) provides clean, well-paced panels in which Colleen’s skin is a deep walnut color while Lucy’s is the color of pale hickory. Jann is the shade of cherry wood.

The book may be a little too detailed. There are a lot of characters and history to keep track of, but Shinn’s fans won’t mind reading the story over and over again until they’ve learned every facet.