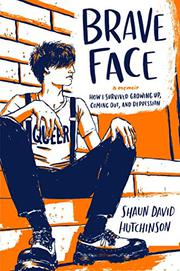 For the fainthearted, a disclaimer gives fair warning that this trip is pregnant with discomfort and mounds of bad behavior. Make it past that fence post and there’s an amalgam of emails, journal entries, and early writing peppered throughout a contemporary memoir. These time-capsule bread crumbs of Hutchinson’s (The Past and Other Things That Should Stay Buried, 2019, etc.) younger voice layer even more honesty than might otherwise be there; though it’s autobiographical, he’s acutely aware that he’s writing what he remembers. As a teen he grapples with his sexuality, unable to understand why his heterosexual make-outs skew repulsive instead of gratifying. When Hutchinson’s own writing helps him realize that he’s gay, it’s not a smooth shift to self-love; rather, the realization helps him articulate why he hates himself. Being gay instills a fear of rejection because he doesn’t yet have the faculty to realize that homosexuality is more than subscribing to a flamboyant Hollywood stereotype doomed to be treated with disgust or ridicule. In recognizing he’s gay, he’s now tasked with re-establishing a future that had been previously forecast on a disingenuous heterosexual foundation. His depression’s always-there voice of suicide says he’ll never have what he wants, coloring his days difficult. There’s a lot to endure and survive and screw up before he finds there’s a niche for anyone in the queer community.