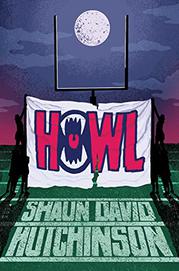 Virgil Knox, a gay 15-year-old, has recently moved with his father from bustling Seattle to the small town of Merritt, Florida, following his parents’ divorce.

New to town, Virgil attends a party at popular jock Finn’s house and, during the course of the evening, somehow finds himself out in the sprawl, a wooded swamp that most of the town avoids, being attacked by a monster. The monster leaves physical scars on Virgil’s body, but the mental and emotional scars are far more severe. Although even when they’re acknowledged, they’re treated as trivial by Virgil’s grandparents, his father does help him get into therapy. With support from theatrical classmate Tripp, his cousin Astrid, and popular student Jarrett and his entourage, Virgil sets out to prove that the monster exists...and that it’s closer to home than anyone might imagine. The story sets out with lofty ambitions, using the monster attack as a metaphor for sexual assault and the victim-blaming that, disgustingly, often happens afterward. The novel, however, falls short of those ambitions, creating a world of underdeveloped characters whose motivations and actions seem to exist only to further Virgil’s story. Astute readers will easily follow the trail of clues that lead to the denouement, leaving the mystery an anticlimax. Main characters read as White.