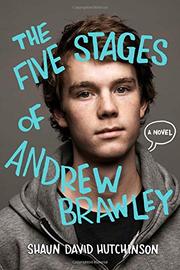 THE FIVE STAGES OF ANDREW BRAWLEY

A homeless, gay teen finds shelter and hope in the hospital where his family perished.

Traumatized by their loss, 17-year-old Drew bides his time working in the kitchen of a suburban hospital. He lives in an abandoned wing and slips in and out of the halls and staff-only areas under the pretense that his grandmother is in a coma. He befriends two teens sick with cancer and finds himself opening up and falling for a gay teen admitted into the emergency room after being set on fire in a hate crime. At the same time Drew pens a gruesome comic strip called “Patient F” to exorcise his own demons and guilt; drawn by Larsen, this effectively communicates his interior turmoil, heightening it to near-grotesque levels over the course of the story. Hutchinson builds believable secondary characters and presents unexpectedly fresh plotting and genuine repartee—the conversations among Drew and his two teen friends feel particularly real and are full of insight and humor. Hutchinson has trouble finding Drew’s own voice, however, both in the text and in the comics he draws, especially when he retreats into his own depression (“The hospital is my ocean. I am its Francis Drake”). However, the story resumes its momentum when he encounters other characters. A cautionary twist toward the end may induce eye-rolling.

Hutchinson remains an author worth watching(Fiction. 13-17)