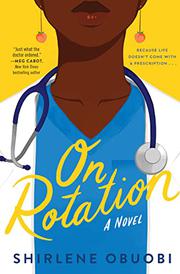 A Chicago medical student is disillusioned by love until she meets a passionate artist in this debut novel.

As a third-year medical student, Ghanaian American narrator Angela Appiah practically wrote the textbook on firstborn-daughter expectations. At 25, Angie still has little room for failure under the watchful eyes of her parents, who expect nothing less than perfection. Unfortunately, perfection is sorely lacking in Angie’s personal life; for starters, she just got dumped by her boyfriend of six months. Her sister, Tabatha, insists that Angie’s constant heartbreak is due to her choosing to date the “low-hanging fruit” who label her an “ethnic, erudite fling.” That said, Angie can’t help but dream of white coats more than white weddings when there are future-defining tests to study for. Enter Ricky Gutiérrez, a handsome young graphic designer she meets in a public garden. She’s immediately smitten: He’s flirtatious, kind, and way too good to be true—which Angie finds out is not a metaphor when he reveals he has a girlfriend. While Angie would like nothing more than to forget her chance meeting with Ricky, fate keeps bringing them together. He volunteers at the pediatric ward in the hospital where she performs her rotations; his best friend, Shae, is in love with her best friend, Nia; and he even has tickets to the same Beyoncé concert. The more time Angie spends with Ricky, the less she can fight her overwhelming attraction toward him, but is she willing to let herself get hurt by him again? Author Obuobi, a physician and cartoonist, is in her wheelhouse chronicling the hectic, and sometimes solitary, life of a medical student. The often witty footnotes, frequently describing medical jargon or Ghanaian traditions, add an amusing flair to Angie’s personality, but the novel’s true strength shines in its more serious moments. Encounters with Ricky’s father, who’s overdosing on heroin, and a 15-year-old gunshot victim powerfully depict the heartbreaking realities that are commonplace in Angie's line of work and how her passion for helping people is where her true success lies.