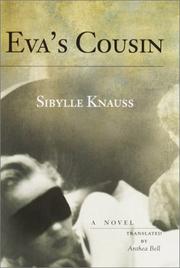 Talk about 15 minutes of celebrity: here’s a novel based on German dramaturgy professor Knauss’s interviews with Gertrude Weisker, who spent the last several months of WWII with her cousin Eva Braun at Hitler’s mountain retreat.

Readers of the account will of course try to distinguish the made-up from what really happened to “Marlene.” At 20, she goes to stay with her lonely cousin Eva while Hitler is away pursuing the war. Though Marlene never actually meets the Führer, she does meet his henchmen Goring, Speer (who shows a brief but polite interest in the physics textbook Marlene is studying), et al. For over half the book, the young woman merely describes her life: the daily routine, her family, the way Hitler’s household was run. We learn that Marlene’s father was anti-Hitler, that Eva’s sister was married off to an SS higher-up, that Eva was totally devoted to her lover and oblivious of politics, accepting her status as mistress even though she yearned to be a wife, that Marlene listened secretly to radio reports from London, and—now—that she has carried into her old age a heavy, if largely secret, guilt about those months. The information is interesting (and avoids any taint of the self-serving), but it doesn’t coalesce into a real plot until the arrival of Mikhail. Having escaped from a work camp nearby, the 16-year-old happens into the teahouse, separate from the main building, where Marlene has been staying alone. The danger in Marlene’s decision to harbor a foreign escapee on Hitler’s turf is obvious to the point of melodrama (she takes an SS lover to maintain a cover). But the tale does spring briefly to a fictional life with the retelling of Mikhail’s imprisonment and escape, his survival instinct and emotional energy making a strong contrast with Marlene’s depressed if pretentious musings.

An earnest if also lethargic footnote to a footnote of history. (This is the first of Knauss’s five novels to be translated into English.)