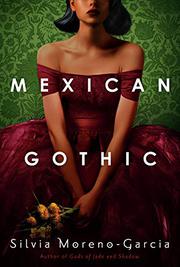 Inquisitive 22-year-old socialite and anthropology enthusiast Noemí Taboada adores beautiful clothes and nights on the town in Mexico City with a bevy of handsome suitors, but her carefree existence is cut short when her father shows her a disturbing letter from her cousin Catalina, who recently married fair-haired and blue-eyed Virgil Doyle, who comes from a prominent English mining family that built their now-dwindling fortune on the backs of Indigenous laborers. Catalina lives in High Place, the Doyle family’s crumbling mansion near the former mining town of El Triunfo. In the letter, Catalina begs for Noemí’s help, claiming that she is “bound, threads like iron through my mind and my skin,” and that High Place is “sick with rot, stinks of decay, brims with every single evil and cruel sentiment.” Upon Noemí’s arrival at High Place, she’s struck by the Doyle family’s cool reception of her and their unabashed racism. She's alarmed by the once-vibrant Catalina’s listless state and by the enigmatic Virgil and his ancient, leering father, Howard. Nightmares, hallucinations, and phantasmagoric dreams of golden dust and fleshy bodies plague Noemí, and it becomes apparent that the Doyles haven’t left their blood-soaked legacy behind. Luckily, the brave Noemí is no delicate flower, and she’ll need all her wits about her for the battle ahead. Moreno-Garcia weaves elements of Mexican folklore with themes of decay, sacrifice, and rebirth, casting a dark spell all the way to the visceral and heart-pounding finale.

Fans of gothic classics like Rebecca will be enthralled as long as they don’t mind a heaping dose of all-out horror.