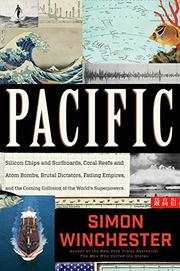 The preternaturally curious writer about everything from the Oxford English Dictionary to volcanoes to the Atlantic Ocean (Atlantic: A Vast Ocean of a Million Stories, 2010, etc.) returns with a series of high-resolution literary snapshots of the Pacific Ocean.

Winchester, who now lives in Massachusetts, does not do the expected: there is no chapter about the geological history of the ocean, followed by a slow chronology. Instead, realizing the difficulty of his own task, the author focuses on 10 aspects of the ocean and its inhabitants—islanders, those on the shores—and uses them to illustrate some historical points. He issues dire warnings about the damage we’re doing to the natural world and about the geopolitical forces—especially the military rise of China—that threaten us all. Occasionally, Winchester makes what seem to be odd pairings (a chapter on both a volcano in the Philippines and the rise of China) and narrative choices (a chapter on the rise of Japan accelerated by manufacturing transistor radios), and he also looks at the international nightmare caused by the 1968 case of the USS Pueblo and North Korea. No matter what the putative subject of the chapter, though, we learn a lot about the ocean: its challenged wildlife, the swirling areas of plastic debris, the Pacific Plate, El Niño, and the Pacific’s vast dimensions. As we’ve come to expect from Winchester, there are plenty of delights. A chapter on surfing has guest appearances by both Jack London and the Beach Boys; and the author examines America’s egregious abuse of islanders during aboveground nuclear testing. Deep worries abound, as well: the dying coral reefs, climate change, and military posturing of the superpowers. The author ends with a hopeful but probably doomed wish for international fraternity.

Winchester’s passionate research—on sea and land—undergirds this superb analysis of a world wonder that we seem hellbent on damaging.