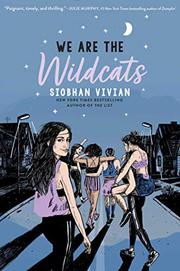 WE ARE THE WILDCATS

“The girls who played varsity last season each still nurse a secret wound, the thinnest of scabs capping a mountain of scar tissue.”

The intense pressure that Coach exerts on these former field hockey champions is far less than what they place on themselves. They are tormented by last season’s championship loss: Ali and Kearson choked; Mel, the leading scorer, didn’t score at all; and Phoebe limped off the field. This year, the West Essex Wildcats—including new members Grace and Luci—are willing to give up romance, free time, and family for the privilege of being a Wildcat. At sleepovers before weekend games the girls enjoy dinner, movies, and bonding, but on this night, the first before the new season, devastating secrets are revealed. Anyone who raised a high school championship trophy—or dreams of doing so—will find Vivian’s (Stay Sweet, 2018, etc.) book powerfully familiar and sink deeply into this juicy read. The writing is both poetic and blunt, just like the badass Wildcats. The pace may frustrate—it takes a while to grasp that the book is not about the season but a series of perspectives and shocking reveals over the course of one long night. The end, while satisfying, lacks sophistication. Most main characters are white; Ali is Korean American, and Luci is Argentinian and white American.