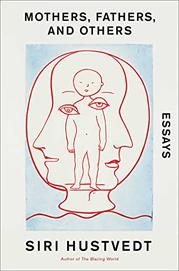 MOTHERS, FATHERS, AND OTHERS

Another outstanding compilation of essays from Hustvedt.

As in her previous standout collections, the author shares personal, familial stories as well as incisive ruminations on a breadth of literary, political, arcane, and germane subjects. These 20 essays and lectures, 12 of which have been previously published and/or delivered in some other version, were penned between 2017 and 2020. The first pieces are more biographical than those that follow. Early on, Hustvedt deftly chronicles her mother’s time in Nazi-occupied Norway as a student at the University of Oslo, her grandmother’s life in rural Minnesota, and her own burial plans. Although each essay is a stand-alone piece, their cumulative effect is staggering. Themes related to sexual hierarchies abound, whether the author is investigating Wuthering Heights, childhood patterning, or artist Louise Bourgeois. “The simple fact that every person begins inside another person haunts motherhood,” she writes. Throughout, Hustvedt questions maternal archetypes and ideology: “Mother ideas invade mothering with a stark morality of good and evil that rarely touches fathering”; “Pregnancy is a chimeric state, and the chimera is still a terrifying animal because it involves mixing”; [Misogyny] is a strange hate…because every human being was born from a woman or person with female reproductive organs”; “That the body, emotion, and nature have been associated with passive femininity, and the mind, reason, and culture with active masculinity is a given in the Western tradition.” The author, one of our most appealing literary polymaths, quotes innumerable resources, and she maintains a pleasingly nuanced balance between striking originality and intellectual synthesis. Pluralism also resonates as a topic relevant to both parenting and literature. “Human beings engage with a book, especially a novel, with an intimacy that does not pertain to most other inanimate objects. Reading is a form of ordinary possession of one person by another,” she writes, delineating why art cannot be confined to a fixed location nor books (like motherhood) to a single meaning.