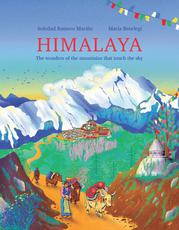 The Wonders of the Mountains That Touch the Sky

A quick visit through the mountain range that features some of the world’s highest peaks.

Snowy peaks rear up in the backgrounds in Beorlegi’s jewel-toned illustrations, but the visual focus is consistently at their feet—on towns, temples, dark-skinned residents in shimmering work or festival garb beneath strings of fluttering prayer flags, and flora and fauna in verdant landscapes. In the randomly ordered series of, mostly, locale-based spreads, the author offers terse descriptions of Durbar Square in Kathmandu and the Buddha’s birthplace in Lumbini, links Rishikesh along the upper Ganges to the practice of yoga, spotlights the snow leopard in a section on the Indian state of Arunchal Pradesh, and ultimately brings the tour to an abrupt end by rhapsodizing over Kailash, a mountain considered so sacred to several religious traditions that climbers are not allowed. The art’s saturated colors are eye-catching, but along with producing an occasional line more overblown than lyrical (“In a monumental effort to reach the stars, these mountains became the highest…”), the author opaquely characterizes Nepal as a “gateway” between India and China. She also mistakenly claims that pagodas are largely associated with Hindu worship and devotes a spread to Tibetan ethnic groups without actually identifying any of them. (This book was reviewed digitally.)

The artwork of this brief look at the Himalayas has a charm that the text struggles to reflect.