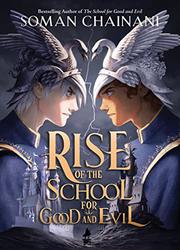 RISE OF THE SCHOOL FOR GOOD AND EVIL

From the School for Good and Evil series

by Soman Chainani ; illustrated by RaidesArt

Twin wizards duel, fret, switch roles, and fall for the same guy in this prequel to the popular series.

Continuing on the theme that it isn’t as easy to distinguish good from evil as it might seem, Chainani goes back to a time when the titular school was run by a pair of immortal adolescents. School Masters Rhian and Rafal have been told that loving one another is the only way to maintain the balance between Good and Evil at the school, but a long run of folk and fairy tales written out by the mysterious pen called the Storian—in which Good triumphs—has led to a fraternal rift. The assignment of decided scapegrace Aladdin to, astonishingly, the School for Good widens the antagonism (could the Storian have made a mistake?). But though Aladdin is the main point-of-view character for major stretches in the early going, no sooner does he hook up with dazzling schoolmate Princess Kyma than the author shoves him deep into the supporting cast to make room for a jealousy-fueled break and some bad behavior that comes when first Rafal then Rhian lock gazes and lips with pirate trainee James Hook (latest of a long line of villains defeated by a certain other ageless teen). Most of the cast reads as White. Lush but rare illustrations underscore dramatic incidents.