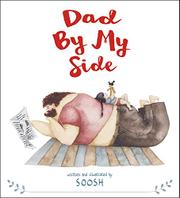 DAD BY MY SIDE

by Soosh ; illustrated by Soosh

In her debut, Soosh celebrates the bond between a father and his daughter.

The cover illustration sets the tone: A beefy, bearded man, shirt riding up and showing back hair, lies on his belly on the floor reading the paper. Lounging on his lower back is his tiny daughter, who’s playing with her doll. The text opens, “With Dad by my side, / there’s nothing we can’t do.” Illustrations and text go hand in hand: “He’s not afraid to look silly” is paired with a picture of the two with hula hoops around their waists, his so tight it’s like a belt. They cook, sew, cuddle, tell stories, play games. In a superhero costume, he protects his sleeping daughter from the monsters under the bed. He measures her height on the wall, does her hair, and keeps in touch while traveling, never missing a lullaby or failing to make time for her. In the watercolor illustrations, the faces are often hidden by the tilt of a head or the fullness of a beard, but body language speaks volumes as dad gets down to the girl’s level, white backgrounds keeping the focus on their sweet relationship. An author’s note nicely explains Soosh’s decision to make the duo’s sizes so disparate. Dad has brown hair and beard, while daughter wears her darker hair in braids; both have pale skin.

Indeed, with a dad like this by a child’s side, there is little that cannot be accomplished.