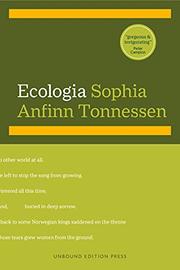 Tonnessen’s poems examine transitions and transformations in all their danger and beauty.

In her debut collection, Tonnessen knits together images that, however disparate, depend in some way on the notion of crossing and redrawing boundaries—most significantly, those reflecting her experiences as a transgender woman. References range widely—pop culture, religion, myths and fairy tales, other poets, birds and flowers, and contemporary events, like Covid lockdowns. In “Theosis,” for example, the speaker is shaving her legs, seemingly a quotidian act but one connected with her hard-won project of claiming her feminine identity: “I want to be a real girl. I want this one thing.” She’s visited by Sophia, considered in the Orthodox Church (Tonnessen’s academic focus is Slavic studies) to be the sainted, feminine personification of divine wisdom. Sophia tells the poet she’s been listening all along and trying to respond, assuring her, “I want you to be a woman too.” The poet asks to be called by their shared name, signifying their mutuality: “(Whisper it to me / like you love me). Whisper it like you want to be inside me.” This conclusion fulfills the poem’s title; theosis means transformation into union with God. Tonnessen’s sprawling poems often employ pauses or unfinished lines, sometimes to convey wry or fraught understatement. As throughout the collection, the speaker works her way from anguish to a deeply felt sense of spiritual union (with herself? with Sophia?): “I will lay with you in the sun until / we both burn swim with you in the river til we both drown,” then “Dance with you until / we are tired / and no longer ashamed.” It’s particularly moving that the speaker in these poems, so often distracted by porn or TikTok or Netflix, continually achieves lyrical moments of grace that feel utterly authentic, making these seeming dislocations into a connected whole and a beautiful manifestation of her experiences.