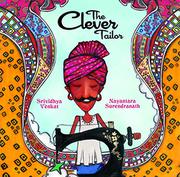 A tailor fulfills his dream of stitching something for his family in this Indian import that adapts a familiar Yiddish tale.

When poor but talented tailor Rupa Ram goes to a wedding, he is given the gift of a saafa, a colorful headpiece made of fine cloth. Rupa Ram wears the saafa until it wears out—but instead of throwing it away, he salvages what is left to make an odhni (scarf) for his wife. When she wears it out, he uses scraps to make a kurta (shirt) for his son, and, with his son’s scraps, a gudiya (doll) for his daughter. At last the tailor is left with the most precious thing of all: a kahaani, or story, which will never wear out. Surendranath’s vibrant illustrations burst with life and color, and such details as the school where Rupa Ram’s wife teaches add welcome dimension to the story’s characters. Venkat’s text is rhythmic, simple, and cleverly repetitive, but ultimately, the stereotypes it reinforces detract from its charm. Leaving the daughter with only scraps is a cycle that reflects deeply entrenched gender hierarchies. Additionally, the glossary in this U.S. edition erases India’s diversity by referring to a saafa as a “garment worn by Indian men at weddings,” implying that all Indian weddings are Hindu and that all cultures in India practice this regional tradition. The tale’s source is given only as “a European folktale.”