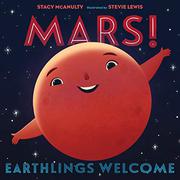 From the Our Universe series, volume 5

With the same exuberance that propelled readers deep into her Ocean! Waves for All (2020), illustrated by David Litchfield, and its three predecessors in the Our Universe series, McAnulty looks to the next planet out for a fresh set of enticing natural wonders. Billing itself a “party planet” (“I want to be the FIRST planet with human guests”), the russet raconteur trumpets its unique attractions. These range from moons Deimos and Phobos (“I know Earth is totally jealous”) to Olympus Mons and Valles Marineris, which is “four times as deep as the Grand Canyon! And not nearly as crowded.” Sure, unlike Spirit, Opportunity, and other rovers, human visitors will have to pack their own water and oxygen in addition to traveling millions of miles…but given a few technological advances, soon enough it’ll be time to “get this party started!” Prospective tourists diverse of age and race are dancing already on Earth in a final scene in anticipation of a trip to our “reMARkable” neighbor. Quiz questions and a timeline cap an enticement that echoes Susanna Leonard Hill’s Mars’ First Friends: Come on Over, Rovers! (2020), illustrated by Elisa Paganelli, in its fizzy mix of fact and fancy. (This book was reviewed digitally with 10-by-20-inch double-page spreads viewed at 75% of actual size.)

Just the ticket for an armchair outing to the red planet.