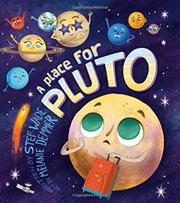 A PLACE FOR PLUTO

If Pluto can’t be a planet—then what is he?

Having been a regular planet for “the better part of forever,” Pluto is understandably knocked out of orbit by his sudden exclusion. With Charon and his four other moons in tow he sets off in search of a new identity. Unfortunately, that only spins him into further gloom, as he doesn’t have a tail like his friend Halley’s comet, is too big to join Ida and the other asteroids, and feels disinclined to try to crash into Earth like meteoroids Gem and Persi. Then, just as he’s about to plunge into a black hole of despair, an encounter with a whole quartet of kindred spheroids led by Eris rocks his world…and a follow-up surprise party thrown by an apologetic Saturn (“Dwarf planet has a nice RING to it”) and the other seven former colleagues literally puts him “over the moon.” Demmer gives all the heavenly bodies big eyes (some, including the feminine Saturn, with long lashes) and, on occasion, short arms along with distinctive identifying colors or markings. Dressing the troublemaking meteoroids in do-rags and sunglasses sounds an off note. Without mentioning that the reclassification is still controversial, Wade closes with a (somewhat) straighter account of Pluto’s current official status and the reasons for it.

Make space for this clever blend of science and self-realization.