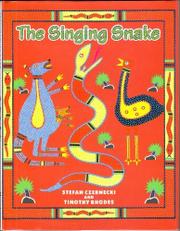 When ``Old Man'' promises to make a musical instrument in honor of the creature with the most beautiful voice, Snake cheats: Jealous of Lark's song but unable to imitate it, he captures the bird in his throat. Though the voice now expresses anguish, the other animals are impressed by its beauty, and Old Man names Snake the winner. As promised, he does make an instrument that looks like Snake—a long, straight horn; but, meanwhile, Lark scratches Snake's throat so that, even after he lets her go, his voice is forever harsh—while the other animals, disgusted with his perfidy, refuse to speak to him. Czernecki illustrates this nicely balanced retelling of an Australian pourquoi tale with glowing illustrations in jewel-like tones, incorporating stylized aboriginal motifs in his striking, decorative designs. (Folklore/Picture book. 4-8)