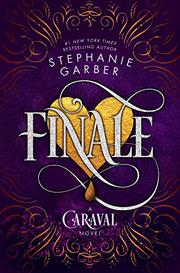 From the Caraval series, volume 3

Picking up just after the end of Legendary (2018), Garber continues to build the world of Caraval with a final installment, this time focusing equally on both Dragna sisters’ perspectives.

After they released their long-missing mother from the Deck of Destiny, Scarlett and Donatella hoped to rebuild their relationship and gain a new sense of family. However, Legend also released the rest of the Fates, and, much to their dismay, the Fallen Star—essentially the ur-Fate—is only gaining in power. As the Fates begin to throw Valenda into chaos and disarray, the sisters must decide whom him to trust, whom to love, and how to set themselves free. Scar’s and Tella’s passionate will-they-or-won’t-they relationships with love interests are still (at times, inexplicably) compelling, taking up a good half of the plot and balancing out the large-scale power games with more domestic ones. Much like the previous two, this third book in the series is overwritten, with overly convenient worldbuilding that struggles nearly as much as the overwrought prose and convoluted plot. While those who aren’t Garber’s fans are unlikely to pick up this volume, new (or forgetful) readers will find the text repetitious enough to be able to follow along.

For fans, a finale that satisfies.