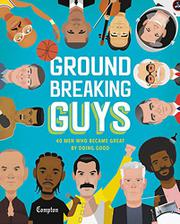 Single-page profiles of men who were guided by their better angels.

“History books are full of men who have made their mark,” Peters writes. “But these great men were not always good men.” So this atypical gallery focuses on men who served communities, demonstrated real respect for others, or otherwise acted on worthy principles. With one exception, men presented were born in or at least lived into the 20th century. That exception, John Stuart Mill, leads off for his then-radical notions about human (including women’s) rights and the “tyranny of the majority.” The ensuing multiracial, multinational roster mixes the predictable likes of Cesar Chavez, Thích Nhất Hạnh, and Roberto Clemente with Chinese diplomat Feng-Shan Ho (who helped “hundreds, and possibly thousands” of Jews escape Nazi-occupied Vienna), Indian child-labor activist Kailash Satyarthi, Malala Yousafzai’s dad and champion, Ziauddin, transgender activist Kylar W. Broadus, and socially conscious creative artists including Lin-Manuel Miranda and Kendrick Lamar. Though intent on highlighting good works, the author doesn’t shy away from personal details—she identifies six entrants as gay and one, Freddie Mercury, as bisexual—or darker ones, such as Harvey Milk’s assassination and Anthony Bourdain’s suicide. Washington works with a severely limited menu of facial expressions, but each subject in his full-page accompanying portraits radiates confidence and dignity.