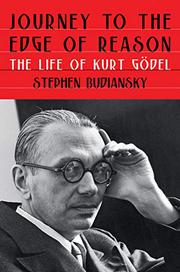 JOURNEY TO THE EDGE OF REASON

The Life of Kurt Gödel

One of the great geniuses of the 20th century, barely known outside academia today, receives a much-needed expert biographical treatment.

Regarding his subject, Kurt Gödel (1906-1978), Budiansky writes, “Einstein had called him ‘the greatest logician since Aristotle,’ and even in Princeton, that town with more Nobel Prize winners than traffic lights, his otherworldly genius had stood out.” Born to a prosperous family in Austria-Hungary, Gödel was brilliant from the start. He entered the University of Vienna in 1924 to study physics but became attracted to mathematics and philosophy. During the 1920s, Vienna was a world center for both disciplines, and Gödel’s talents were quickly recognized. Many readers are unaware that nothing in science is proven. The law of gravity states that things fall down only because things always fall down. No proof exists that they can’t fall up. Only mathematics produces absolute proofs. Mathematicians find this deeply satisfying, but they are still recovering from the shock of Gödel’s great discovery, in the early 1930s, that many systems in mathematics, while true, can’t be proven. Although a historic milestone, it’s an exceedingly difficult concept; readers with some background in college mathematics will be best-suited to comprehending the author’s explanations. Fortunately, Budiansky writes so well that this is no problem. Although Gödel remains the focus of this terrific book, the author delivers insightful portraits of a score of brilliant men and women, almost all German or Austrian, descriptions of their work and academic struggles in early-20th-century Europe, and their lives after Hitler destroyed German science. Many moved to the U.S., where they encountered a land of Eden, especially Princeton, “a picturesque pre-Revolutionary village attached to the university campus.” Barely escaping Vienna in 1940, Gödel settled at the Institute of Advanced Study in Princeton, New Jersey, became a close friend of Einstein, and continued groundbreaking work despite increasing periods of obsession and paranoid delusion, which eventually led to his death via slow starvation.

An outstanding biography of a man of incomprehensible brilliance.