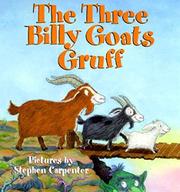 In this entry in the Growing Tree series, the publisher copyrights the text, while Carpenter provides illustrations for the story; here, the three billy goats named Gruff play on a nasty troll’s greed to get where the grass is greenest. Logic has never been the long suit of this tale: Instead of letting the two smaller billy goats be terrorized by the mean and ugly troll, children wonder, why doesn’t the biggest billy goat step in sooner? It’s still a good introduction to comparatives, and the repetitiveness of the story invites participation. The artwork matches the story: The characters are suitably menacing, quivering, or stalwart, and the perspectives allow readers to be right there in the thick of the action. (Picture book. 2-4)