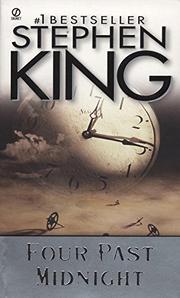 A double-double Whopper hot from the grill of "America's literary boogeyman," as he puts it in his introduction: four sizzling horror novellas sandwiched within the theme of "Time. . .and the corrosive effects it can have on the human heart." Sure, they're dripping with excess wordage and high-calorie sentiment, but cut away the fat and there's still more steak here than in any other horror book of the year. The premium cut sits on top: "The Langoliers," whose wildly original premise—that a group of airline passengers travel a few minutes into the past to encounter the entities that eat Being, leaving Nothingness—unfolds in classic King fashion, with a psychic blind girl, a demented financier, a mystery writer, and a British spy awash in mounting suspense (why is the beer "Flat! Flat as a pancake!"?; and what is that sound like "Animals at feeding time" at the place near the airport?). And if the entities turn out to be more whimsical than scary ("sort of like beachballs"), they bounce the tale into King's most upbeat ending ever, a rhapsodic celebration of life. Next comes "Secret Window, Secret Garden," the most self-conscious novella of the four, a dour and tense reworking of Misery and The Dark Half. Here, the crazed fan of the former and the animus-made-flesh of the latter meld into the avenging figure of John Shooter, a failed writer who claims that top author Mort Rainey has stolen one of his stories. Or is Rainey only dreaming Shooter, as penance for a past sin? More inventive—and the scariest of the lot—is "The Library Policeman," turbo-engined horror about a vampire of fear masquerading as a librarian; a subtext (and one graphic scene) of child sex-abuse hones the story into a modern morality tale. Last comes "The Sun Dog," more gleefully splattery horror about the terrors of childhood, wherein a boy comes to own a Polaroid camera that takes pictures only of a menacing hound from hell. King says that" 'The Sun Dog'. . .sets the stage" for a "long novel called Needful Things"—already written. The four novellas here, he confesses, were mostly written "during the two years when I was supposedly retired." Some people just don't know how to take a vacation—not that King's fans will mind: there's grand entertainment value here, reflected by the massive first printing of 1.5 million.