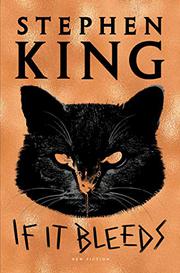 The master of supernatural disaster returns with four horror-laced novellas.

The protagonist of the title story, Holly Gibney, is by King’s own admission one of his most beloved characters, a “quirky walk-on” who quickly found herself at the center of some very unpleasant goings-on in End of Watch, Mr. Mercedes, and The Outsider. The insect-licious proceedings of the last are revisited, most yuckily, while some of King’s favorite conceits turn up: What happens if the dead are never really dead but instead show up generation after generation, occupying different bodies but most certainly exercising their same old mean-spirited voodoo? It won’t please TV journalists to know that the shape-shifting bad guys in that title story just happen to be on-the-ground reporters who turn up at very ugly disasters—and even cause them, albeit many decades apart. Think Jack Torrance in that photo at the end of The Shining, and you’ve got the general idea. “Only a coincidence, Holly thinks, but a chill shivers through her just the same,” King writes, “and once again she thinks of how there may be forces in this world moving people as they will, like men (and women) on a chessboard.” In the careful-what-you-wish-for department, Rat is one of those meta-referential things King enjoys: There are the usual hallucinatory doings, a destiny-altering rodent, and of course a writer protagonist who makes a deal with the devil for success that he thinks will outsmart the fates. No such luck, of course. Perhaps the most troubling story is the first, which may cause iPhone owners to rethink their purchases. King has gone a far piece from the killer clowns and vampires of old, with his monsters and monstrosities taking on far more quotidian forms—which makes them all the scarier.

Vintage King: a pleasure for his many fans and not a bad place to start if you’re new to him.