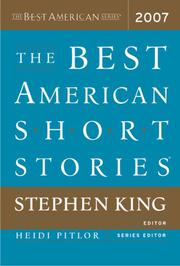 A rich, dense collection of 20 stories—King has harvested a bumper crop.

Auchincloss, Barth, Beattie, Boyle…the alphabetical order bunches together some big names at the start. The first three stories are entertaining and quirky, but T.C. Boyle’s “Balto” really hits paydirt. In this marvelous cliffhanger, about the forging of character, a 12-year-old girl can protect her beloved father if she lies under oath. What will she decide? Other family dramas also have real bite. The renowned Canadian Alice Munro explores intrepidly the aftermath of murder (“Dimension”). A deranged father has killed his three small children; his stoic, baffled wife visits him in the insane asylum; later, through his letters, she enters his twilit world, still reluctantly bound to him. The late Beverly Jensen looks at a large, loving, quarrelsome family (“Wake”). The head of the family has died. His children drive him through an ice storm to his burial in a remote Canadian village, where festive mourners greet the hearse in an extraordinary tableau. That boisterous affection for the dead is offset by two moving but unsentimental accounts of tenderness toward the dying (Stellar Kim’s “Findings and Impressions” and Eileen Pollack’s “The Bris”). Surrealism is represented by Karen Russell’s assimilation fable (“St. Lucy’s Home for Girls Raised by Wolves”) and Roy Kesey’s airport nightmare (“Wait”), while Bruce McAllister’s searing story about the crisis of conscience experienced by a CIA covert-ops guy who spreads plagues in left-wing Third World countries is a memorable example of speculative fiction (“The Boy in Zaquitos”). Also noteworthy are Richard Russo’s “Horseman,” an intriguing campus story that’s a subtle illustration of the saying that good teachers teach themselves, and Joseph Epstein’s “My Brother Eli,” a juicy if superficial portrait of the artist (a thinly disguised Saul Bellow) as a bastard.

Just one criticism: The diversity on display does not extend to stories of minorities, which, considering all the talent out there, is troubling.